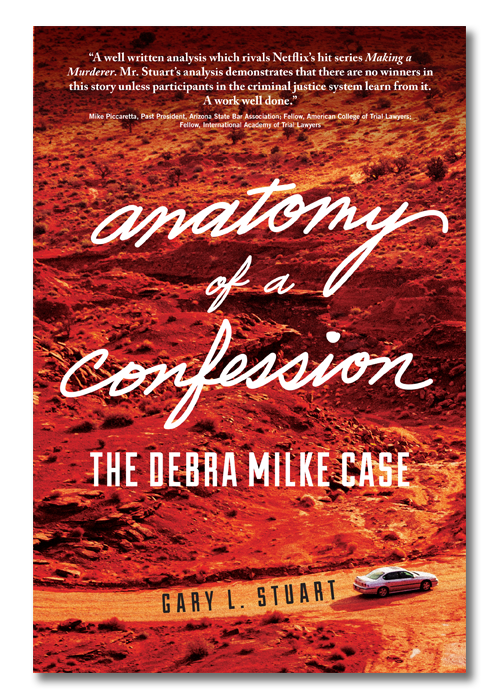 Anatomy of a Confession is the story of the 1990 murder trial of Debra Milke. Two men—James Styers, a family friend and single father of a two year-old daughter, and his friend, Roger Scott—murdered Debra’s four year-old son in the Arizona desert. One of them implicated the boy’s mother.

Even before Debra was questioned, the police hung a guilty tag on her. Debra Milke spent twenty-three years on death row for the murder of her four year-old son based solely on a confession she never gave.

This is also the story of Detective Armando Saldate, his history of coercing confessions and violating Miranda standards, and the role the Phoenix Police Department played in the cover-up and misconduct in its handling of the Milke investigation.

Finally, Anatomy of a Confession examines the prosecutor who presumably knew about Detective Saldate’s past, that the “confession” was probably bogus, but also knew that without it, he had no case against Debra.

Like the very best of true crime narratives, Anatomy of a Confession is a vivid and shocking reminder of what America’s vaunted presumption of innocence is all about and how terribly wrong things can go when the criminal justice system is abused by the very people meant to uphold it.

“Gary Stuart’s Anatomy of a Confession vividly describes how a ‘constitution be damned’ detective, a blindly zealous prosecutor, a grossly inexperienced defense attorney, and a presumptuous trial judge all converge to set in motion the introduction of a ‘confession’ that was neither appropriately witnessed nor recorded as required by police department policy and the criminal case law. Author Stuart’s telling of Debra Milke’s more than two decade journey through the American legal system expertly details how assumptions by the very players whose job it was to ensure a legally level playing field did just the opposite. By their ineptitude or callousness, an arguably innocent mother was found guilty of the cold blooded murder of her 4-year-old child. Anatomy of a Confession is a story that will enthrall not just law enforcement, lawyers and the judiciary, but particularly those who, as jurors, selflessly serve to make our criminal justice system truly work, the American citizenry.”
Craig Blakey

“Once again, Gary Stuart has demonstrated brilliance in his writing as well as his understanding of the criminal justice system in Anatomy of a Confession. However, the title is somewhat of a misnomer, because what Gary Stuart has provided is a comprehensive inside look at the entirety of a high profile capital murder case, from the crime itself, to the investigation, pretrial motions, trial, and the complicated appellate process.

Judge Ronald Reinstein, Retired
“In Anatomy of a Confession: The Debra Milke Case, Gary Stuart takes the reader through the long, hard legal battle Debra has somehow amazingly survived. As Debra’s appellate attorney for fourteen years throughout her federal capital habeas appeals and her subsequent Arizona state re-trial and appellate proceedings, I can attest to how truly complex and often very intense a lengthy legal fight for a person’s life can be. Gary thoroughly conveys the defense team’s difficult but ultimately rewarding journey with Debra in a way that will be understandable even to lay readers, but without oversimplifying the capital case and appellate process. What happened in Debra’s case should never happen to any American citizen, and I highly recommend Anatomy of a Confession to anyone who is interested in learning why her case went so wrong. Only together can we, as a collective, educated and concerned citizenry, help to prevent such travesties of justice in the future.”
Lori Voepel