Looking Up Can Tell You Who You Are 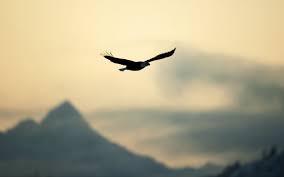 Angus had been riding an 11,000 foot mountain, on a narrow ridge, when he looked up and saw something that changed his view. Not of the mountain or the eagle. It changed his view of himself.

Course, that was more ‘n a hundred years ago. But it works today, just as well as it did then. The eagle, riding a thermal, was slipping sideways looking down the mountain, while Angus was looking up. Can’t say how the eagle reacted, but Angus was curious about what the eagle saw. Down in a narrow valley, a small young fox was chasing something. As Angus watched the eagle, it dipped a wing and began a lazy float down toward the fox. The fox was focused on whatever smaller critter was down slope of him, the eagle, and Angus. It came to Angus that he was in a terrible dance, him, then the eagle, then the fox, then some unseen critter about to die. He got a little dizzy watching the bird—his horizontal reference point was upset by the steep slope of the mountain. “Tucson,” Angus said to his horse, “which one am I? The man astride a fine horse? The eagle in a superior position to conquer his world? The fox, minding his own business and not looking up at danger in the sky? The critter too small to even see from here?”

Angus thought on it for the rest of the day. As night started to fall on the mountain, he decided he loved the eagle and had little pity for the fox. Not a comforting thing, he decided. It’s good I have no real power in this world. Too many eagles and not enough foxes, he decided.