The Greatest Spectacle in Sports 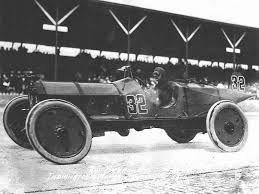 My son, Tosh, and I went to Indianapolis over the Memorial Day weekend this year to see the so-called “greatest spectacle in sports,” the Indy 500. It was aptly named; it was a great spectacle and featured a new sport for me. Trying to wrestle a parking place on somebody’s front lawn on race day–that alone gave it spectacle status.

It put me in mind of Angus, my 1880’s cowboy, who could never have imagined such a thing—drunk—sober—or hightailing away from a posse. The time frame was close enough. Angus was a lawman in the New Mexico Territory in 1909, the year they built the first gravel-and-tar automobile racetrack in Indianapolis. They killed two drivers right out of the chute; that gave it spectacle status on day one. Five thousand hardy spectators watched that first race. The next year, the crowd soared to sixty thousand and a man named Harroun won while sporting the world’s first rearview mirror. This year, the greatest spectacle in sports attracted two hundred and fifty thousand over-stimulated fans in grandstands designed for normal-sized people. I can only suppose normal-sized for this year’s race was upwards of two hundred and fifty pounds of fat, happy, sort-of-sober people. It was a spectacle—no doubt of that. I loved it. 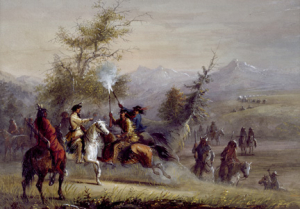 In Angus’s day, the greatest spectacle in the Rocky Mountains was the gathering of mountain men at the “Rendezvous.” Some say three thousand mountain men showed up, but probably not all in the same year. They gathered in the late summer to share tales, trails, whiskey, and women. Besides stocking up on supplies, they made a spectacle of themselves drinking, dancing, gambling, and competing in mountain-man sports (wrestling matches, tomahawk throwing, foot and horse races). It was probably a lot like this year’s Indy 500, although I did not see any tomahawk throwing or foot races. They had horses in the infield, with Indiana State Troopers in the saddle. Angus would have like that.