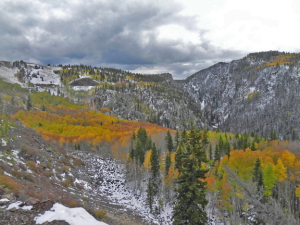 Angus rode the high ridges along the New Mexico-Colorado border when was 19. He had his reasons and back then, in the early 1880s, a man needed a creed. He began with what almost everyone in the west believed—Stay True To Nature. The rest of it flowed from that premise.

Over time, Angus added three other moral points to his compass. He decided what he did was nobody’s business except his own. Since there were very few men riding ridges above 10,000 feet in those days, it seemed natural. Don’t cross my trail and I won’t cross yours. I got my reasons for being here, but it ain’t none of your concern.

In time, the second part of his creed surfaced—hide your misery. While he reveled in the high and lonesome country, he didn’t want anyone intruding on his grief. He’d lost his young wife, Mazy, at 17. That was so much more than just his business; it was a secret he shared only with the mountain and the critters that crossed his path, or provided his dinner.

The third creed—stay out of sight, had nothing to do with the first two. As long as he stayed out of sight, he was safe from rogue Indians, men on the run, wayward settlers lost in the canyons, and anyone who might be in need of an extra gun, or a horse. There are many young men and women today that could find both peace and strength in Angus’ creed. All it really takes is grit, some open territory, and a settled mind.